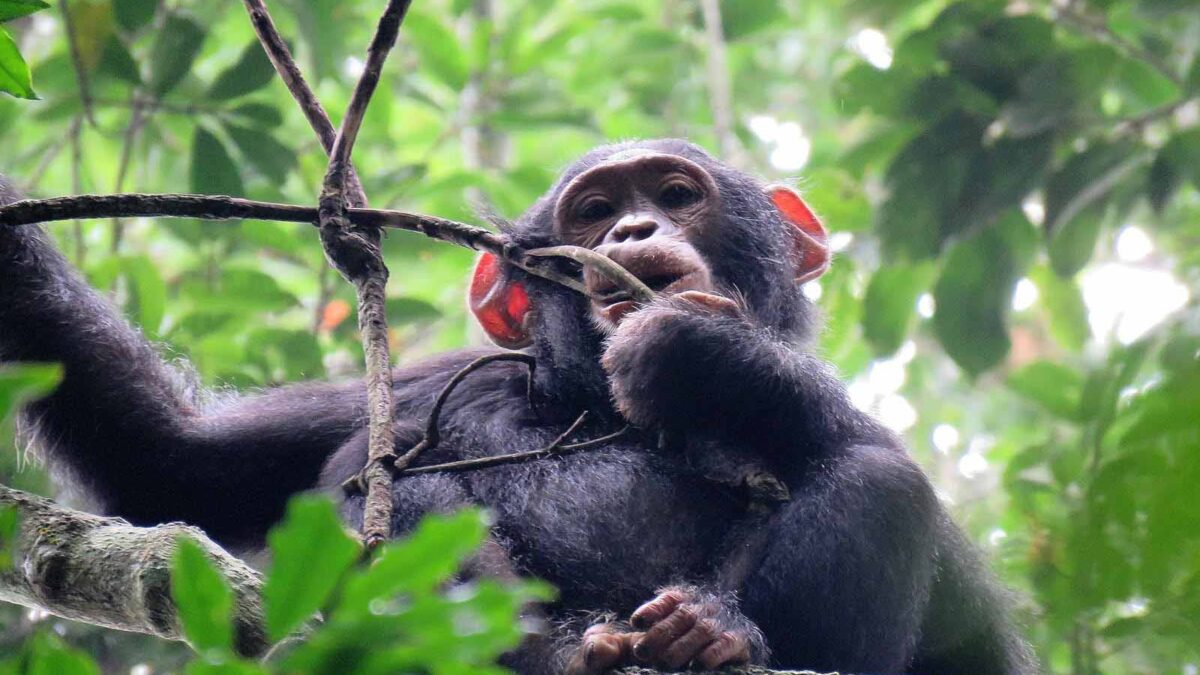 Exploring the African rainforest and coming face to face with gorillas and chimpanzees in the wild is an extraordinary safari adventure. These authentic experiences in tropical Africa are some of the most coveted jungle adventures on bucket lists and offer an unparalleled encounter with intelligent, closely related primates. If you’re considering adding one of these experiences to your next vacation itinerary, both gorilla and chimpanzee trekking offer exhilarating and unique opportunities.

As primates, gorillas and chimpanzees share a close biological connection with humans, which draws many tourists to the central African rainforests to spend time with these intelligent apes. Trekking through the misty, muddy jungle to spend a brief period observing these animals can be a similar experience for both activities. However, there are subtle differences to consider when deciding which experience to prioritize on your trip. Here are the facts to help you make an informed decision.

Gorillas and chimpanzees are both great apes that belong to the same Hominidae family, which also includes bonobos, humans, and orangutans. However, they are classified differently, with gorillas belonging to the tribe Gorillini and genus Gorilla, and chimpanzees belonging to the tribe Hominini and genus Pan. Despite these differences, both gorillas and chimpanzees share physical characteristics such as taillessness, large brains relative to body weight, strong arms, and long, opposing fingers and toes for grasping.

Chimpanzees and gorillas have the largest brain size relative to body size among all primates, and they share more than 98% of human DNA. Chimpanzees are particularly closely related to humans due to their larger brains and higher intelligence. Both species are fascinating to observe due to their intelligent behaviors, making gorilla and chimpanzee trekking a popular safari adventure in Africa. Whether you choose to observe gorillas or chimpanzees, you will be in for an enchanting experience.

Gorillas are herbivorous apes that primarily eat vegetative foods, such as bark, while chimpanzees are omnivorous apes that primarily consume fruit and occasionally hunt for animal protein, such as monkey meat. Despite being the largest living primates, gorillas are known for their gentle nature and are often referred to as “gentle giants.” They live in small, patriarchal groups led by a dominant male known as a silverback. Adult gorillas can weigh up to 220 kg (485 pounds) and stand at a height of approximately 1.8 m (6 ft), with the silverback being almost twice the size of a female.

Chimpanzees are closely related to humans and share many similarities. They are social animals that live in communities of several dozen individuals, led by an alpha male and his group of male allies. Chimpanzees can reach a height of up to 1.6 meters (5.5 feet) when standing upright, with males weighing up to 154 pounds and females weighing up to 110 pounds.

While they may share some traits with their peaceful primate relatives, chimpanzees are also known for their aggressive and violent behavior. Male chimpanzees are prone to attacking each other over territory, and research has shown that chimp-on-chimp violence is relatively common. This suggests that chimpanzees have a predisposition towards violence and murder.

Both gorillas and chimpanzees are considered endangered by the International Union for Conservation of Nature (IUCN) and are found in the tropical rainforests of Africa. However, mountain gorillas, a subspecies of gorilla, inhabit the volcanic mountain slopes of East and Central Africa in Uganda, Rwanda, and the Democratic Republic of Congo.

Where to See Gorillas & Chimpanzees in Africa

If you want to see gorillas in their natural habitat, some of the best places to visit are Uganda, Rwanda, the DRC, the Republic of Congo, and the Central African Republic (CAR). Two of the top destinations for gorilla trekking are Bwindi Impenetrable National Park in southwestern Uganda and Volcanoes National Park in the Virunga mountains of northwestern Rwanda. These parks offer well-established conservation and sustainability programs and have the infrastructure in place to support gorilla-viewing experiences, including a range of jungle retreats for travelers looking for a unique vacation in the remote regions of Africa.

The rainforests of East and Central Africa are home to some of the best destinations for tracking and observing chimpanzees in the wild. Tourists can spend up to ten hours a day observing human-habituated chimpanzee troops in large areas of the forest in the Democratic Republic of Congo and in more easily accessible destinations such as Kibale Forest in Uganda, Nyungwe Forest in Rwanda, and Mahale Mountains National Park in Tanzania.

Gorilla and chimpanzee trekking in the African rainforests is a truly extraordinary experience that every nature lover should have at least once in their lifetime. Coming face to face with an intelligent and thoughtful primate that is closely related to humans is unlike any other animal encounter in Africa.

To raise funds for the conservation of gorillas and chimpanzees in Africa, government authorities and conservation organizations have created guided tours that allow tourists to visit protected forest parks and spend limited time with these primates. These tours are known as gorilla trekking or chimpanzee trekking.

For these tours to be possible, selected groups of chimpanzees and gorillas had to undergo a process called habituation, which involves gradually introducing them to the presence of humans without disrupting their habitat or social lives. The habituation process typically takes 2-5 years and is not meant to tame the apes, but rather to make them tolerant of humans, usually at a distance of around ten meters. The goal is to allow tourists to observe these animals in their natural habitat without disturbing them.

Gorilla trekking is a guided tourist activity in which rangers and local expert trackers lead a group of tourists into the rainforest to find a group of gorillas that have been habituated to humans and spend a limited amount of time with them. Tourists are usually allowed to get as close as 10 meters (32 feet) to the gorillas and the encounter can last from 1 to 4 hours.

Comparing Gorilla and Chimpanzee Trekking: What are the Differences and Similarities?

Another difference between gorilla and chimpanzee trekking is the number of visitors allowed to visit a single group of primates. The number of tourists visiting a group of human-habituated gorillas or chimpanzees is strictly limited to small groups for a short period of time, at a controlled distance of 10 meters (32 feet). This is because great apes are susceptible to human diseases due to our close genetic relationship and to prevent any unknown consequences from prolonged interactions with humans.

However, chimpanzee trekking allows more guests to visit a human-habituated group than gorilla trekking. Gorilla trekking permits in Uganda and Rwanda allow a randomly selected group of up to eight tourists, accompanied by two rangers and led by one expert tracker guide. Chimpanzee trekking permits allow for 10-12 guests per group. Porters may also join the trek to help guests hike steep slopes and carry their backpacks, but the total number of trekkers remains controlled.

The selection of who joins which excursion group is done randomly at the briefing point before the trekking begins. Trekkers usually gather at the trailhead by 7:30 AM for a briefing session where the warden explains the rules and procedures for the trek and determines which gorilla or chimpanzee group each trekker will visit based on their physical fitness.

Gorilla and chimpanzee trekking rules are similar, as both primates share many of the same traits. Before heading into the jungle, the park warden will brief the trekking group on basic rules such as not eating near the primates, not mimicking their sounds, avoiding direct eye contact with the alpha male, maintaining a distance of at least 10 meters, and avoiding direct contact at times. These are simple rules that anyone can follow, but the trek to find the gorillas or chimpanzees can be challenging and can make or break the overall trekking experience.

Gorillas and chimpanzees roam freely within protected national parks in wide territorial ranges. Mountain gorillas have home ranges that vary from 3 to 15 km2 (1.2 to 5.8 sq mi) and their movements typically cover an area of 500 m (0.31 mi) or less on an average day. Since they build new nests for sleeping every night, they forage in a different area every day. Therefore, trackers guide guests to a different location every morning, which can take anywhere from 30 minutes to 4 hours before the chimpanzee or gorilla group is found. The search may take longer than anticipated, especially during the dry season when there is less food and the primates have to forage deeper into the forest to find sustenance.

Gorilla trekking is generally more challenging than chimpanzee trekking, particularly when tracking mountain gorillas in Uganda, the Democratic Republic of Congo, and Rwanda’s Virunga Mountains. Mountain gorillas live at elevations of 2,200–4,300 meters (7,200–14,100 feet) in the rugged highlands of the Virunga Mountains and southwestern Uganda’s rift valley forests. Trekking through the misty, muddy, and impenetrable jungle at such high elevations on uneven terrain is not for the faint of heart. It requires physical and mental stamina, but the experience can leave lasting memories of contact with untamed nature in Africa.

In comparison, chimpanzee trekking typically takes place at lower elevations on a more even rainforest floor, and it is usually easier to locate the chimpanzee group using their loud vocalizations. However, keeping up with the group once it is found can be physically demanding. Chimpanzees are hyperactive during foraging expeditions and do not stay in one place for long, so trekkers often have to keep up on foot as the chimpanzees swing through the forest canopy. One of the best places to experience wild chimpanzees without expending too much physical energy is Kibale National Park in western Uganda, where the forest is relatively flat with navigable vegetation and it usually takes less than two hours to find the chimpanzees. 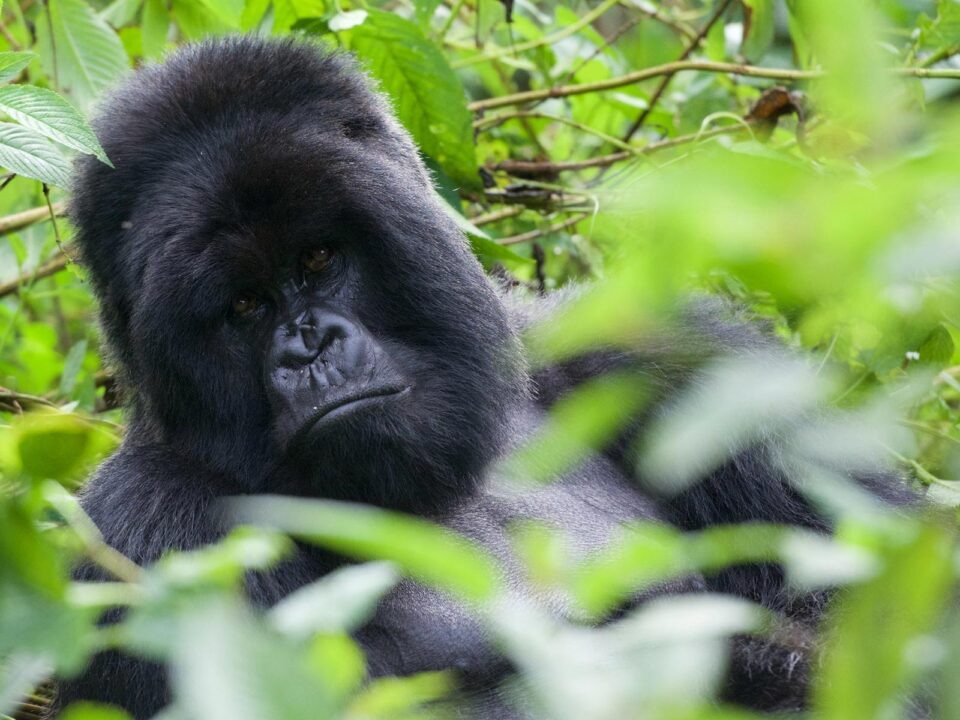 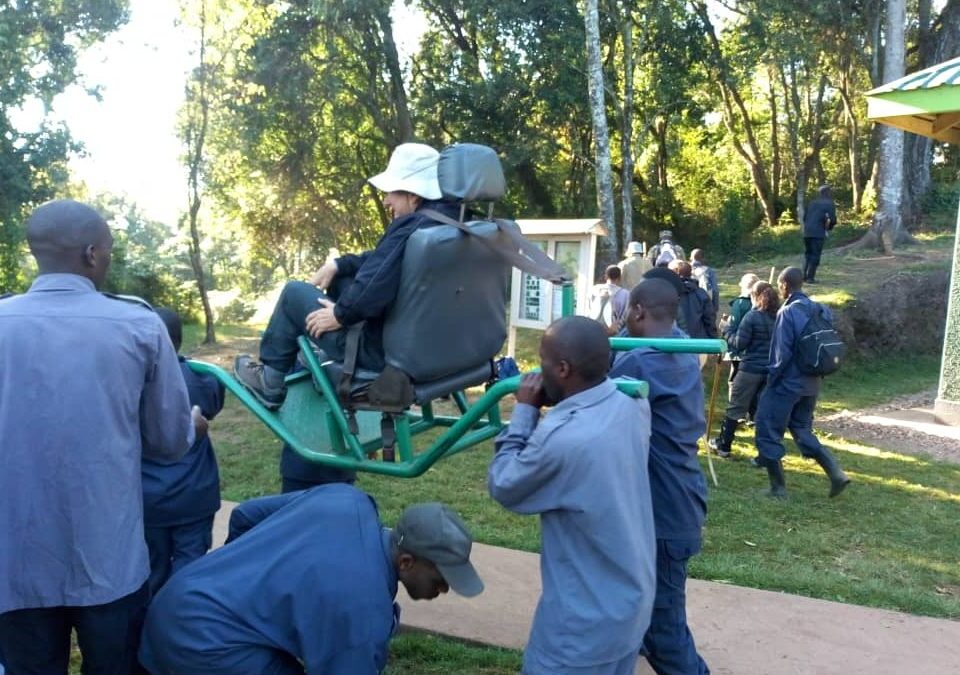 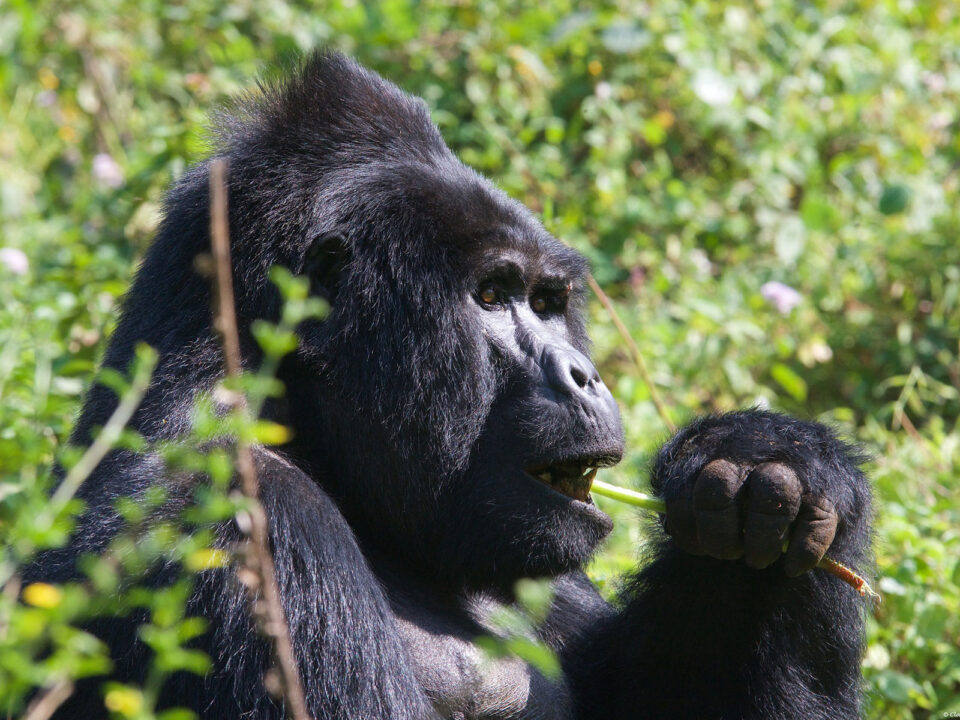